U.S. Supreme Court Justice Stephen Breyer participated in UCLA School of Law’s Supreme Court Simulation course on Feb. 5. Joining by video, Breyer engaged in an insightful and wide-ranging conversation with roughly two dozen students. He shared how he prepares for oral argument, offered a general glimpse into the justices-only conference where they discuss and decide cases, and presented his views on what makes a good advocate.

The Supreme Court Simulation is taught by Adam Winkler, the Michael J. Connell Professor of Law and one of the most-cited legal scholars in the country, and lecturer Ryan Azad ’17. It is among UCLA Law’s broad array of experiential courses that give students the skills to succeed as practicing attorneys. In the course, students take cases that are currently pending before the high court, simulate attorneys’ oral arguments, and decide and write judicial opinions.

During his visit, Breyer shared several amusing anecdotes from his quarter-century on the court. He responded to queries from members of the class, including a question about the process that he uses in writing a concurrence or dissent. And he received a word of thanks from another student whose family was helped by the court’s 2020 opinion, which Breyer joined, in Department of Homeland Security v. Regents of the University of California, which struck down a Trump administration effort to rescind the DACA immigration program.

“Justice Breyer offered an inspiring perspective on the inner workings of the Supreme Court. The advice and stories that he shared undoubtedly boosted our students’ understanding of the court and added to the tools that they are collecting in becoming successful advocates,” Winkler says. “We are so grateful that he agreed to participate in our class – a hugely valuable benefit that our UCLA Law students enjoyed because we were meeting on Zoom. He cracked jokes, had a jovial attitude, and was an absolute pleasure to have visit.” 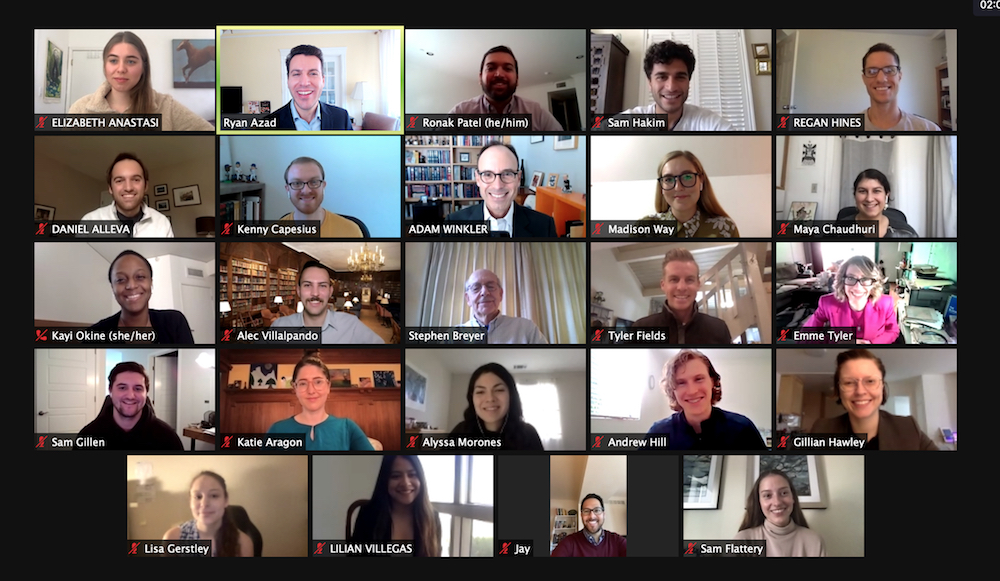 For the students, the chance to learn directly from a Supreme Court justice was a once-in-a-law-school-career opportunity.

“Justice Breyer is a large part of the reason I came to law school. I fell in love with listening to SCOTUS oral arguments, and he’s one of my favorites. He’s always so thorough, thoughtful, and genuinely concerned with understanding all of the issues and reaching the right result. He’s also incredibly funny,” says Emme Tyler ’21, who hopes to become a judge during her legal career.

“Having an opportunity to ‘meet’ him meant everything to me. For those less familiar with the life cycle of the court’s cases, he provided a thorough description, sprinkled with delightful anecdotes, that conveyed his infectious passion for the law, the court, and his job,” Tyler says. “Justice Breyer is what I want to be when I grow up: someone with integrity, passion, and an undying commitment to upholding an institution that serves as the last bastion for individual and civil rights.”

Breyer has served on the Supreme Court since his 1994 appointment by President Bill Clinton. He previously came to UCLA Law in 2010 and 2015. Most recently, Justice Elena Kagan spent a day at the law school in 2018. Justices Sonia Sotomayor, Ruth Bader Ginsburg, Sandra Day O’Connor, and several others have also visited over the years.

Join UCLA Law’s Epstein Program for a timely conversation with Professor Scott Cummings on his new book, An Equal Place: Lawyers in the Struggle for Los Angeles.