UCLA School of Law has established the Eric M. Zolt Chair in Tax Law and Policy in tribute to Professor Eric Zolt’s enormous contributions to the school and field of tax law.

A member of the faculty since 1985, Zolt is the Michael H. Schill Distinguished Professor of Law. A renowned scholar, award-winning teacher and extraordinary mentor to students and fellow faculty members, Zolt served as the founding director of the Lowell Milken Institute for Business Law and Policy at UCLA Law. 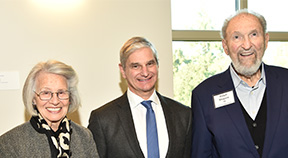 Gifts totaling $2 million fund the Zolt Chair, including lead donations provided by longtime UCLA supporters Ralph ’58 and Shirley Shapiro; Lowell Milken ’73, whose gift established the Lowell Milken Institute at UCLA Law; and Zolt and his wife, Kathy Smalley. Other UCLA Law faculty members, alumni and friends of the school were among the 34 donors who generously contributed to the chair.

“UCLA School of Law has been an integral part of my life,” Zolt says. “I am humbled by the support for this chair from my colleagues, former students, alumni, as well as friends and family. This chair will provide support for UCLA Law’s leading work in tax law and policy.” 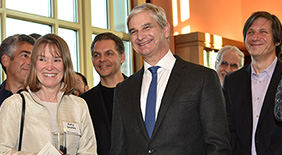 Eric Zolt and his wife, Kathy Smalley, listen as colleagues roast and pay respects to Zolt.

A graduate of the Wharton School at the University of Pennsylvania who earned an M.B.A. and J.D. from the University of Chicago, Zolt was a partner at Kirkland & Ellis before joining UCLA Law. From 1989 to 1992, Zolt served in the U.S Treasury Department, first as Deputy Tax Legislative Counsel and then as the founding director of U.S. Treasury’s Tax Advisory Program for Eastern Europe and the former Soviet Union.

Working with the Treasury Department, U.S. AID, the World Bank, the United Nations and the International Monetary Fund, Zolt has provided tax policy advice in more than 30 countries. Zolt previously served as the director of the International Tax Program at Harvard Law School and is co-founder and first executive chair of the African Tax Institute, a research and training institute for African tax officials.

“Eric Zolt is a rare breed,” says UCLA Law Dean Jennifer L. Mnookin. “He’s a first-rate scholar and a terrific teacher who makes tremendous contributions to the institution in other ways, as well. He has led by example and earned the respect and admiration of all. I am so delighted that we have the opportunity to establish a chair in his name.”

A celebration of Zolt’s contributions and the creation of the chair was held at UCLA Law on Feb. 7, drawing more than 100 faculty members, alumni and friends of the school.

The Zolt Chair is the 31st endowed chair at UCLA Law. The chair has been established pending approval of the UCLA Academic Personnel Office and Academic Senate.

Donations raised for the Zolt Chair are part of the $4.2 billion Centennial Campaign for UCLA, which is scheduled to conclude in December 2019 during UCLA’s 100th anniversary year.

Join us in the iconic Franklin D. Murphy Sculpture Garden to enjoy a caffeinated bevarage, meet the ALS board, and learn about our upcoming programming!